The Overland Expo is a place for motorcycle riders and four wheel drivers to see the latest gadgets on offer and to catch up with friends. We were pleased to be able to introduce Brook and Lieschen to some of our old buddies. 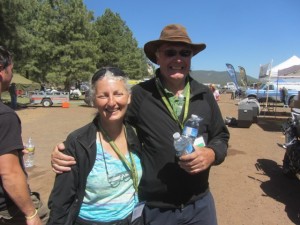 Ken and Carol Duval have travelled the world once on their R80 GS and are three years into their second journey. They are an inspiration to travellers – young and old. 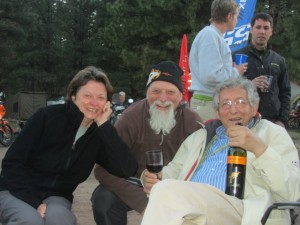 With Ted Simon - note his bottle of Aussie Red

We also met legendary Ted Simons again. He wrote the great Jupiter’s Travels about his first around-the-world journey. Ted’s book has motivated thousands to take to the road. At 81 he might not be on the bike anymore but he still has tales to tell.

We said goodbye to friends old and new and headed to the coast for a surprise visit with our Aussie buddies. Well, some know we are coming, but one doesn’t. 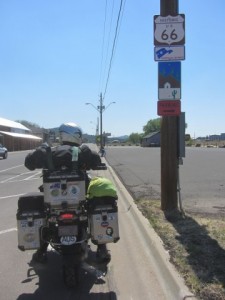 It’s time to take the iconic road – Route 66. It doesn’t traverse the US now but there is still enough of it to make the ride magic. There are no trucks, few cars and just a few motorcycles. 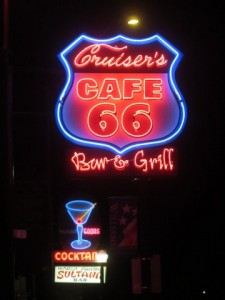 But there is history – Williams, Arizona is like walking back into the 60s with neon signs, café serving massive milkshakes and cars from a by-gone era. It’s fantastic! 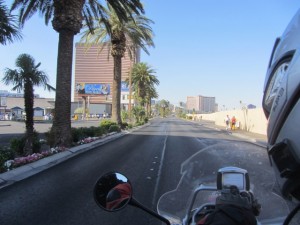 From history to the bright lights of Las Vegas – temperatures soar into the 40s as we make our way to the Hoover Dam and then on into Vegas.  It’s a blast. We ride the strip and even manage to pay our hotel bill with winnings from the poker machines.

It’s too hot to ride into Death Valley so we detour past the Joshua Tree National Park and into Palm Springs. 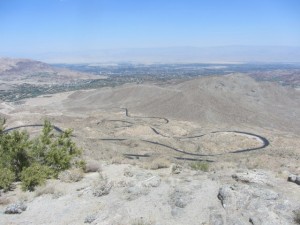 Over the Sierra Nevada

Crossing over the Sierra Nevada the roads twist and turn. The temperature drops from the high 30s to a chilly 15 or so. This is what motorcycling is all about.

Next stop San Diego and a huge surprise.