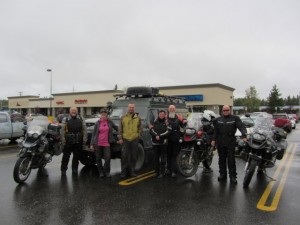 The sun didn’t shine and the there was a little rain, but that didn’t dampen our enthusiasm for the journey head of us. The six of us – John, David on their GSs, Nicole and Christian in the Land Rover Defender and us – were like kids going on a school camp – just so excited.  Even the news the night before we left that it was snowing on the Atigan Pass wasn’t going to stop us heading north on the Dalton Highway – the road to the Arctic Ocean. 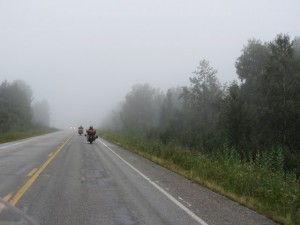 Leaving Fairbanks the cloud hung around and we were all dreading what lay ahead. 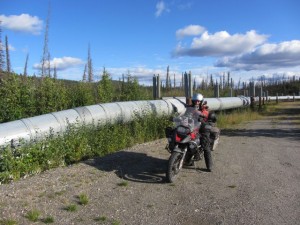 The Dalton Highway is the last frontier – 800 ks of dirt, dust, mud, gravel and some very smooth sealed sections. It was going to test us and the bike. It is a haul road, made to provide supplies to the oil workers at the Arctic Ocean and to service the Alaska Pipeline that brings the oil and gas from the north to Valdez in the south – more than 1200 ks away. The highway follows the pipeline, sometimes crossing it. 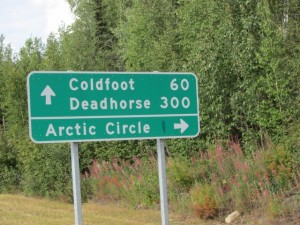 And then the clouds parted leaving us with bright sun and piercing blue skies. There are only a few places to stop along the Dalton and one is the work camp on the banks of the mighty Yukon River. They sell fuel and very good hamburgers as well as the obligatory sticker that says you’ve crossed the Arctic Circle. 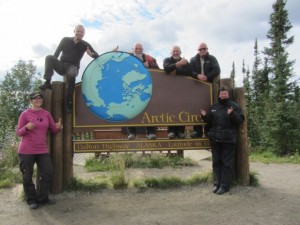 The conditions couldn’t have been better when we crossed the Arctic Circle – latitude 66° 33′ 44″. 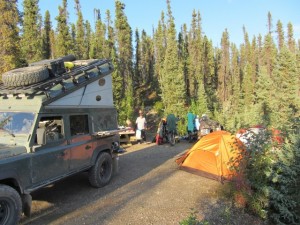 Marian Creek - chilly in the morning

There is plenty of daylight in Alaska at this time of the year – night is just a slightly dimmer version of day – so we didn’t have to rush to find a camp site. The Coldfoot camp is about halfway along the highway but the camp itself is not the best place to stop unless you like to sleep a few metres away from a truck park and fuel stop. We rode a few ks north and stayed at the Marion Creek Campground.

It was bloody cold in the morning and there was frost on the bikes, tents and the Landy. We built up the fire and warmed up before the run to Deadhorse. 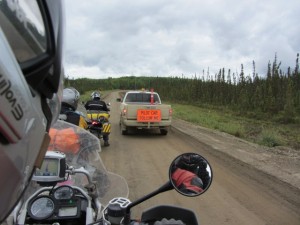 Following the pilot car through the road works

The biggest problem on the highway is the road works. Summer is the only time the work can be done. The machinery chops up the dirt and they water it down to stop the dust. This makes the road like riding on porridge. And the pilot car sets the pace through the most difficult pieces of road. 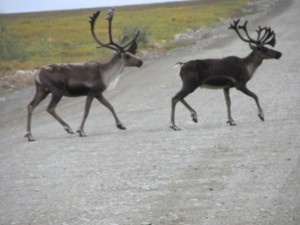 But road works, mud and cold pale in to insignificance when you see the wildlife. Caribou 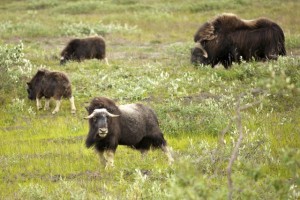 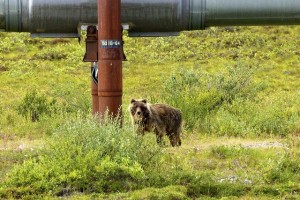 And this grizzly strolling along under the pipeline 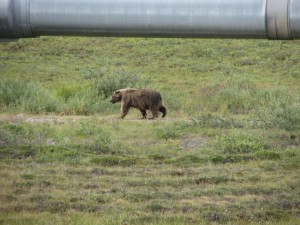 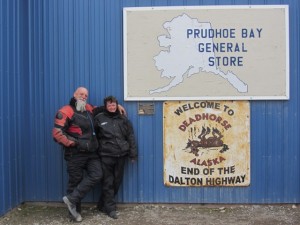 We make it to Deadhorse – as far as the road will take us. This is an incredible achievement – 49,201 kilometres through 19 countries in less than 10 months. 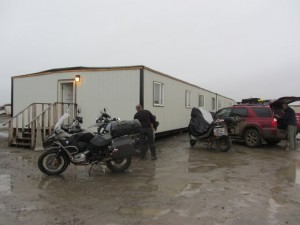 But we still have to make it to Prudhoe Bay and the Arctic Ocean. There’s no camping here – it’s cold and there are way too many bears around. Our overnight accommodation at the Deadhorse Camp was basic and expensive – and the area was a quagmire in the morning after a night of cold, arctic rain. 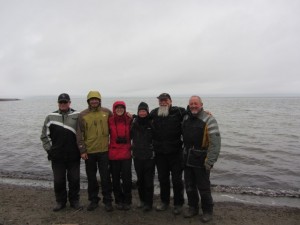 AT the top of the world - David, Christian, Nicole, Shirl, Brian & John

The oil companies won’t allow you to make your own way to the water. We had to go by tour bus. It was all worth it when the six of us stood on the edge of the Arctic Ocean – we made it! 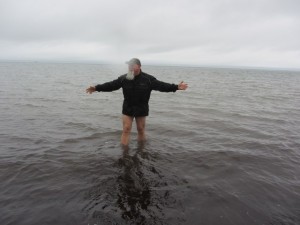 No sense - no feeling!

Brian had to go that little bit further than anyone else – taking his bike pants off and wading in to the water! He swam in the Antarctic and would have done here but it was against the rules. That is rain on the lens of the camera! 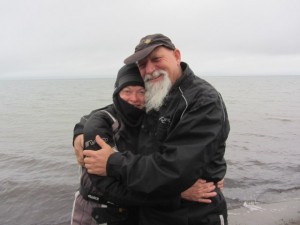 A special moment for us

The rain actually made the ride back down to Fairbanks a little easier – but incredibly dirty. It took an age to get the dirt off us and the bike. 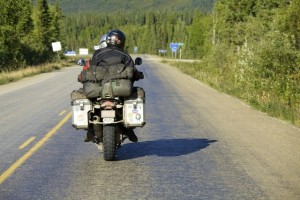 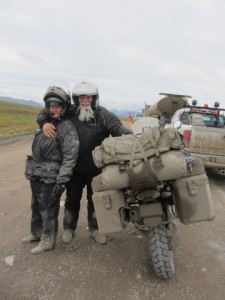 This was one of the most incredible parts of our journey made all the more enjoyable by the friendship of Christian and Nicole and David and John. Thanks to all of you for making a memorable experience a joyous one. We will meet again – somewhere on the road.