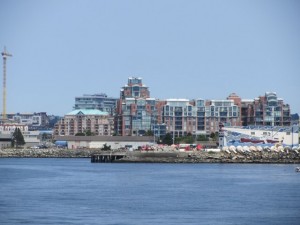 Vancouver Island from the ferry

Our border crossing in to Canada was the easiest yet. We rode on to the ferry in Port Angeles, Washington State, spent a glorious time sitting in the sun catching up with our friends Ken & Carol Duval and then rode off the ferry on to Vancouver Island. A quick stop at the immigration booth to get the passports stamped and we were in Canada. 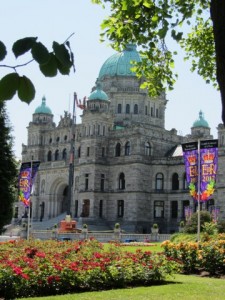 For the next week we chilled out on Vancouver Island, part of British Columbia and home to the province’s capital – Victoria. The city boasts wonderful architecture and vistas across the water. Yet again we were blessed with perfect weather and clear, blue skies. 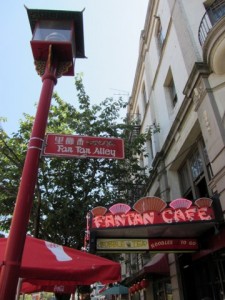 Victoria boasts Canada’s oldest Chinatown. We dined at the Fan Tan Café, at the end of Fan Tan Alley. This is Canada’s narrowest street and is where the motorcycle scene from Mel Gibson’s film Bird on a Wire was filmed. 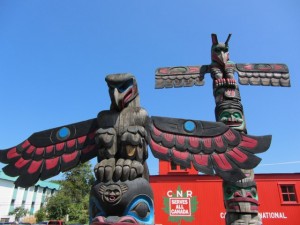 Vancouver Island was once a logging centre and some towns have had to reinvent themselves to remain viable. Towns like Duncan where a track of yellow footprints take you to about 80 totems. 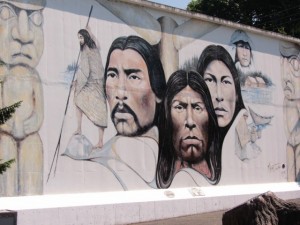 And Chemainus, the town that invited artists to come and paint murals depicting the history of the town. Now it’s one of the must-see towns on Vancouver Island. 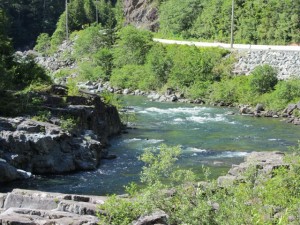 Like so much of this part of the world it is the natural beauty that is Vancouver Island’s major attraction. Ken and Carol’s friend Bob (an overland traveller turned family man) took us on a wonderful ride to Tofino.

The mountains, the forests, the rivers,, the lakes – wow. 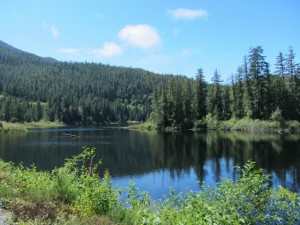 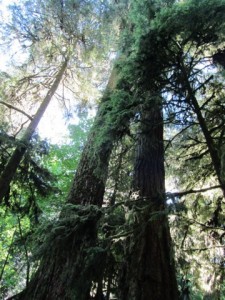 A highlight was Cathedral Grove where the Douglas Fir trees grow to giant proportions. 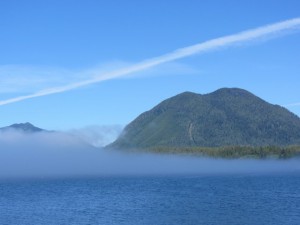 And Tofino itself emerged from the sea mist – just for us. 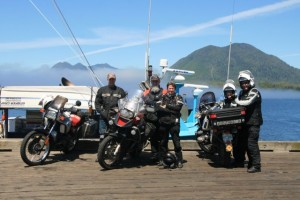 With Bob, Ken & Carol at Tofino 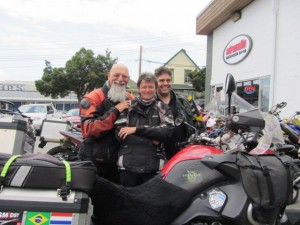 Back in December Greg Neufeldt contacted us through this webpage. We had the pleasure of meeting him on Vancouver Island. Greg has worked with Doctors without Borders and Claudio of Long Way Round fame. Greg rode the motorcycle while Claudio sat on the back filming the documentary,  Racing Green, about the electric car. An interesting bloke with a good heart.

Soon the week was over and it was off to the mainland to begin the serious journey to Alaska.

Sunset over Nanoose Bay - the view from our room