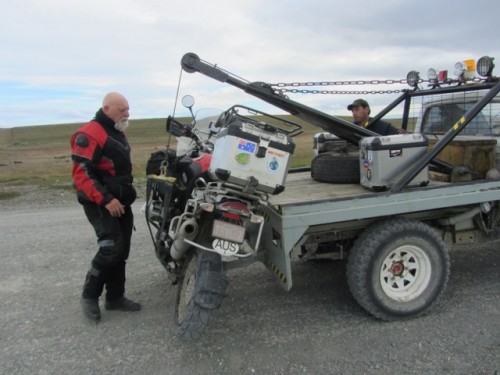 Ushuaia to Buenos Aires – January 2 to 13

After saying goodbye to new friends and old we didn’t realise how soon we’d see Jens and Kati again. We left Ushuaia and took the road north. It was our last stretch of ripio for some time and it left us with our first flat tyre of the trip – sharp stone right through the rear tyre.  We couldn’t find the hole with the tools we had so it was impossible to use the tyre plugs we carry.  A very kind man with two young daughters and his wife in the car stopped to help. He took Shirley to the nearest town, Cerro Sombrero . He waited while the servo man rang the mechanic and the local “Vulcaniser”.  When they didn’t answer he drove Shirley around town to find them. When the tow truck was revving up and the tyre man was ready for us, our saviour kissed Shirl on both cheeks and went back to his holiday. 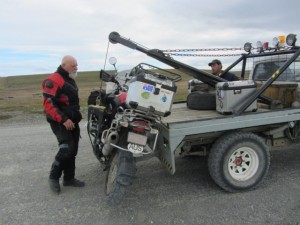 Not the most dignified position for the bike

The tow truck driver put the bike in a sling and Brian sat on the back of the tow truck to try and stop the bike getting too badly scratched.  Brian removed the wheel and the ‘vulcaniser’ found and fixed the hole in no time and we were on the road to the local Hosteria. Coming up the road were Jens and Kati! It was a very pleasant surprise and we had a great night.

We had to make a dash for the north and hit Ruta 3 ready to visit some of the tourist spots along the way. Of course, we didn’t bank on it being summer holidays. There was no room at the inn in town after town. One day we did over 600 ks. Another we did over 900 ks! 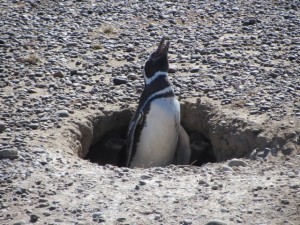 Two babies to look after - 'where are you?'

Along the way we visited the Magellanic penguin rookery at Punta Tombo. We just can’t get enough of these little birds. It was very hot and they were trying to keep cool in the shade or waiting for their mates to return to the nest so they could hit the water.  The chicks had hatched and they need a lot of looking after. 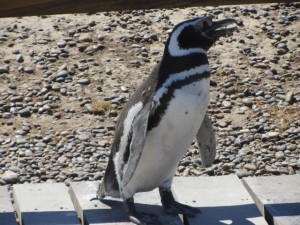 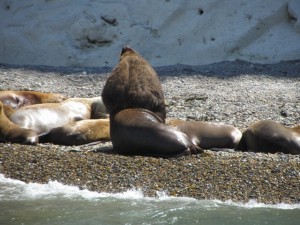 You can see why they call them sea lions

We spent a couple of days at Puerto Madryn and went dolphin watching and visited a sea lion colony on Peninsula Valdiz. The male sea lions are massive creatures and their pups were very inquisitive swimming around the boat.

Next stop Buenos Aires. It is time for the bike to get some TLC.  It has handled the rough conditions very well but the fuel economy is very high and it’s due for its 60,000 service. BMW were able to help with a diagnostic check and the friend to all overland motorcyclists, Javier at Dakar Motos did the valves and the oils. 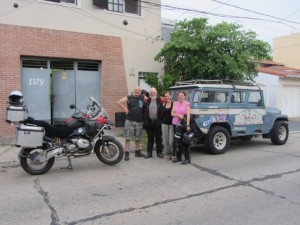 Javier and Sandra - good friends to all motorcyclists

Javier and his wife Sandra help travellers with all things motorcycle including assistance with customs if you are shipping in or out of Buenos Aires. They are terrific people and the service took some time as we had to stop and chat, share some lunch, cool off in front of the fan in the blistering heat. They are great people!

But Buenos Aires wasn’t all about bikes. There was time for a tango lesson. We were both pleased to find out we didn’t have two left feet! No pictures, though. We were too busy concentrating on the dance of passion. 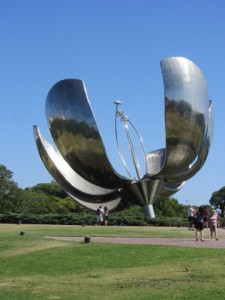 The world's most expensive flower

In BA there is the world’s most expensive flower – a  metal bloom that did open in the morning and close up at night. It’s broken but still a beautiful sight. 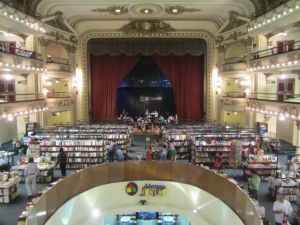 My favourite bookshop is Reader’s Feast in Melbourne (just reopened in the old George’s building in Collins Street) but in San Telmo we found El Alteneo. Once a majestic theatre it is now a bookshop. Lucky we are on the bike – there were plenty of English language books to choose from. The stage is now a café and the private boxes small reading rooms.

A top spot for the dearly departed

In Recoleta we visited the famous cemetery where Evita Peron is buried. It is like a town within a town. Winding streets and narrow laneways lined with massive mausoleums – the final resting places for Buenos Aires’ elite. They are ornate in the extreme with many bearing statues of the deceased. You can see inside some and the coffins are stacked in with some even having cellars full of the dear departed. It’s creepy in a way as you can easily get lost. 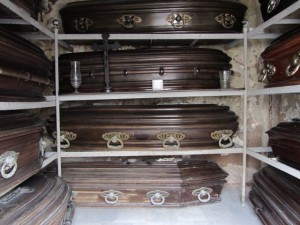 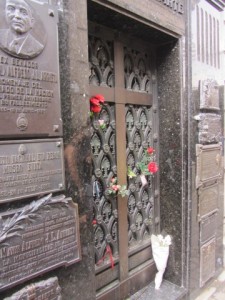 Don't cry for me Argentina

But the one the people come to see is Evita. She is buried with her family, not her husband Juan Peron. In Argentina there are two groups – those who love Evita and those who don’t. There are fresh flowers on the door to the crypt and many plaques honouring the woman who made such a big impact in such a short period of time. 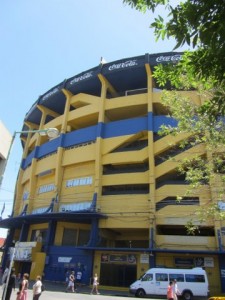 No red and white here

And in South America there is football – their passion. We went to the home of La Bocca – the light blue and yellow team. Their fiercest rivals wear red and white. One of the major sponsors of the La Bocca stadium is coke. Here their logo is in black and white – they will not have anything red in the vicinity of their home ground. Funny business – football

Our week in Buenos Aires flew by and it was time to move on to Uruguay. Couldn't resist this one!